South University 2022 graduate Cretude Dorcius hasn’t had a straightforward path to becoming a nurse practitioner. In fact, in her native country of Haiti, Cretude Dorcius practiced as a general MD (Medical Doctor), applying the degree and credential she had acquired studying medicine in Cuba. 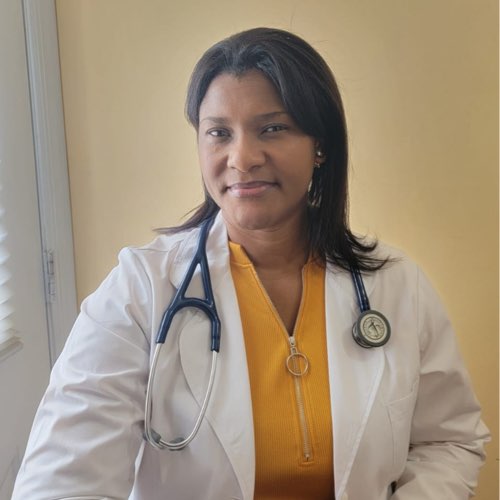 Yet, when she moved to the United States (U.S.) to be with family, Cretude needed different credentials to continue practicing medicine. The time-consuming process of becoming an MD in the U.S. would involve studying for and passing multiple exams as well as completing several years of medical residency. Still Cretude wanted to stay in healthcare, so she started studying for the exams while volunteering at a hospital helping patients. There, she made a friend who suggested she look into becoming a nurse practitioner.

“Having a family with two children made me think that, with the nursing career, I would be able to earn degrees step by step while working as a nurse,” explains Cretude. “The nursing path was more flexible and achievable in a much shorter time. It does not matter if I am a nurse or an MD; I joined to take care of patients.”

Through her colleagues, Cretude heard about South University’s online Master of Science in Nursing (MSN) with a specialization in Family Nurse Practitioner (FNP) program. “Not only did some friends mention the school to me, but I decided to select South University because of the flexible schedule and affordable tuition,” she says.

Once she began her MSN FNP courses, Cretude found a strong and supportive community among her peers. “Studying in a group and having positive-minded friends encouraging me throughout my nursing career has made it easier for me to become a nurse practitioner,” she shares.

The faculty and staff were also instrumental to her success. “They encourage questions and interactions between students and between teachers and students. They always give feedback on work and provide constructive criticism,” she says. “The staff is incredible.”

Based on her academic achievements in the program, Cretude was selected to join the South University Chapter of Sigma Theta tau International Nursing Honor Society. However, because of the COVID-19 pandemic, Cretude initially struggled to find a clinical rotation. Eventually, she found a Family Nurse Practitioner who was a South University alumna willing to help current students with their clinical rotations.

Since completing the MSN FNP program, Cretude has passed her board exam and started working with an organization that offers telehealth and home-based care visits. She has been featured on a local radio station talking about preventive health for a local radio station and she volunteers with the region’s largest healthcare organization helping patients deal with cultural differences and language barriers. She also volunteers to assist farm workers with translation and medical advice. Today, Cretude is seeking her Doctor of Nursing Practice at South University.

“My goal is to have my medical practice and a healthcare agency one day and enter the academic world to share my knowledge with students. I hope one day to return to South University as a nursing faculty,” Cretude shares. “Without education, I would not be where I am today. Education is key to success, and it is part of my story.”

If you’re a South University graduate and want the chance to see your accomplishments featured, log in to our Alumni Site and click Share Your Story in the Alumni Success section.

Is a DNP Degree Right for Me? What You Should Know Before Deciding

A DNP is the highest degree available to nurses who want to focus on clinical practice. Here’s what you need to know to decide if it’s right for you.

As a working RN and mother of six-year-old twins, Dana Moore found the support and flexibility she needed to earn her MSN FNP degree online at South University.

See how Alumni Achievement Award winner Nicole Meredith has been positively impacting her patients, her community, and her profession since earning her BSN in 2016.